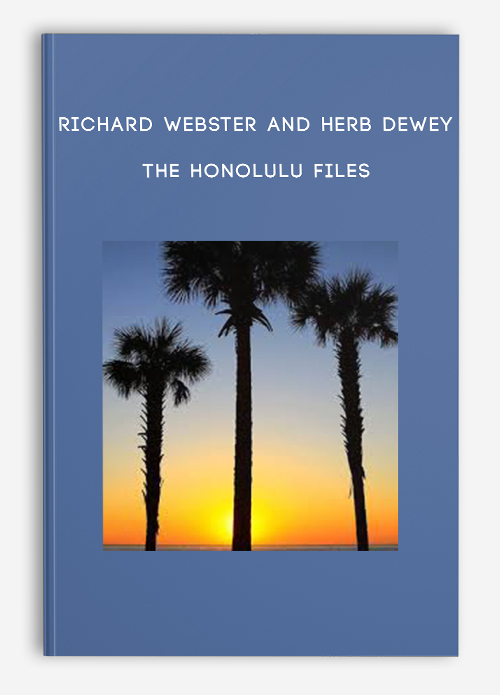 Get Richard Webster and Herb Dewey – The Honolulu Files at imcarea.com

What Are The Honolulu Files?

Beginning in 1992, professional reader Jonathan Twidwell hosted “Night Magick”, a weekly radio show in Honolulu which featured guest psychics who gave readings to callers who phoned in to the show. Listeners who tuned into Jonathan’s show were treated to live readings from a wide variety of guest psychics, two of which – Herb Dewey and Richard Webster – are of special interest to students of mentalism and cold reading.

When Jonathan approached the Pro Shop to see if we were interested in the on-air recordings of Herb and Richard, you can well imagine our response to the rare opportunity to hear two legends of mentalism in action and the chance to examine how they presented their craft.

Within The Honolulu Files you will find a set of rare audio recordings featuring Herb Dewey and Richard Webster giving real-time readings to real people. That’s an important consideration, especially if you’ve ever watched a video for the mentalism community in which the client receiving a reading is a studio audience member or a friend of the production crew and is under pressure to just smile and agree with the reader.

You have no doubt heard that, as a beginning reader, it is good to get as many readings as possible from other readers. This teaches you what works, and what doesn’t, and helps you develop into the best reader you can be.

The old saying, “If you get only one trick from this book, it will have paid for itself, is just as true when listening to readings delivered by others. You may visit your local fortune teller and sit through 30 minutes of absolute blather, but there will undoubtedly be at least one line, phrase or technique that – with better phrasing, presentation and delivery – you will add to your repertoire, making your own readings wonderfully compelling and meaningful for your clients.

Admittedly, reading the lines used by Herb and Richard on the pages of their books certainly has its place in the study of cold reading, but actually hearing them in a real live context is invaluable. By actively listening to The Honolulu Files, the discerning student will be able to determine what worked for Herb Dewey and Richard Webster, and in so doing, determine what works best for themselves. Herb and Richard were both commercially successful and masters of their art, so you will most certainly learn many things that you will want to add to your own readings immediately.

What Else Is In The Honolulu Files?

In addition to the audio recordings of Herb Dewey and Richard Webster, The Honolulu Files package includes a companion book which offers a critical analysis of the recordings… plus a whole lot more.

When we first heard the recordings of Herb and Richard, we were ready to release them, as is, but we thought it might be helpful to include a brief special report that would put the recordings into historical context. You know, maybe 2 or 3 pages of background information… a couple hours at the keyboard, and The Honolulu Files would be ready for release. Before long, however, the 2- or 3-page document turned into something a lot more involved.

Several weeks later, the resulting document had taken on a life of its own, and included the fascinating behind-the-scenes story of Jonathan’s show, critical analysis from a number of contemporary readers, an in-depth look at the theories and methods of Herb and Richard, and something called “The SWAGGER Gambit” that you can incorporate into your own readings right away.

•  How Herb avoided two common mistakes made by most readers

•  Two critical elements for every effective and meaningful reading

•  A look at Jonathan’s favorite oracle – The Mahjong Reading

In addition to the two audio recordings and 48-page companion book described above, the Honolulu Files package includes an exceedingly-rare audio recording of Herb Dewey on a Baltimore radio show during which clocks and watches are psychically repaired, a caller’s thought-of color is divined, and a couple of readings are delivered. Herb also makes some predictions about football scores, answers one caller’s question about spirit manifestations, and deals with another caller’s sensitive medical question.

This recording spotlights a side of Herb that isn’t apparent in any of his books, and provides insight into why Herb was so effective in his craft.

Every artist – whether they are a writer, a musician, an actor or a reader – improves and expands their craft by studying the works of others.

Are you ready to grow?

Wendy Patton – Get the Deed “Subject To”