Product Delivery : You will receive a receipt download link WITHIN 24 HOURS through email.
Should you have any question, do not hesitate to contact me: [email protected] 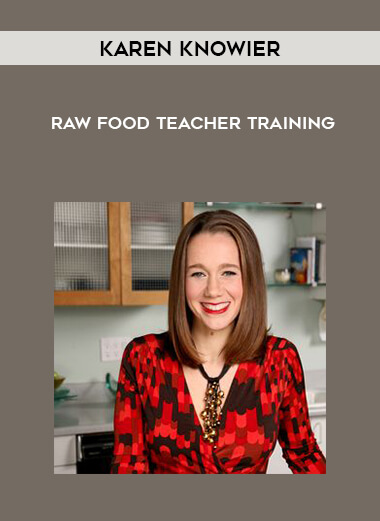 ARE YOU READY TO START TEACHING RAW FOOD CLASSES THAT CHANGE LIVES?

How to Become a Fantastic Raw Food Teacher Who Delivers Great Classes, Does So with Confidence and Ease, Loves What They Do AND Makes Great Money…

WHILE CHANGING LIVES FOR THE BETTER!

If any of the above is you, then I have the most perfect opportunity for you to turn your dream into a reality – but the window of opportunity is only open until 1st July 2019 . NOW EXTENDED UNTIL Friday 19th July 2019 for International Raw Food Day participants. Last chance until spring 2020.

author of “Raw Food Made Simple” and the founder of the “International Association of Raw Food Coaches, Chefs and Teachers” (IARFCCT).

What you may not know about me is that 20 years ago, in 1999, when I was just beginning to go solo in my raw food business adventures, I had no clue how to teach raw food or how to create a raw food class, as no raw food teachers existed in the UK – let alone any kind of raw food teacher training courses!

Like many people, I had plenty of doubts and fears, and believe it or not, massive confidence issues. In fact, public speaking was my number one fear. And, not only that, I really wasn’t sure if anyone would want to learn from “little old me” (I was 26 and looked 16!) or if I could teach them anything they didn’t already know.

What if they felt it was all a bit too basic, or they didn’t like my recipes, or…?

However, as I was to find out very quickly and delightedly, people did want to learn from me, there was plenty that they didn’t know, and not only did they love my recipes, but those same recipes put them on the path to going raw and reaping all those wonderful benefits…

In short, everyone was happy!

I got to teach what I knew and loved (and earned some very handy money for my time spent doing it).

My students got to learn how to make quick and easy raw food that they loved and would go on to make in their own home, so they could finally go raw and get as healthy and energetic as they hoped to.

Through teaching my first class I realised that:

A lot has happened since that first class. In fact over the next ten years I went on to teach thousands of people in live class settings in the UK, the US, Germany and the Netherlands.

I learned that people the world over are literally hungry for great raw food recipes that they can make quickly and easily in their own home, and, one thing is absolutey for sure:

There are NOT enough raw food teachers in this world

A lot of people don’t pursue their dream because they are worried about there being too many raw food teachers, or that they don’t know enough, but trust me, we are a very long way away from THAT reality! In fact, I would go so far as to say that there is a severe LACK of raw food teachers in this world. (And you only have to be a step or two ahead of those you’re teaching, so it’s really no big deal.)

Not only that, but what most teachers are NOT seeing yet is that you don’t need to teach raw food to those who want to eat raw food.

Allow me to explain…

First of all, right now there are literally tens of thousands of people around the world who are raw food enthusiasts and want to learn more raw food recipes from someone like you.

Why? Because while they may have bought the books, read the websites, and even watched the YouTube videos, they STILL haven’t started eating raw food in the way that they want to.

Something is stopping them, and, more oftentimes than not, it’s one thing and one thing only:

They want to see the food being made and TASTE it before they commit.

In fact, they might be feeling a little bit scared, intimidated, confused or even overwhelmed by everything they’ve read and seen, and they just want someone to take them by the hand and show it to them in a way that is accessible and doable for them…

It makes sense when you think about it, right? Perhaps you were the same…?

I know that a huge turning point for me personally was when a new raw food friend made me a very simple almond milk right at the start of my raw food journey (1993) – for me that was a life-changing moment! Then he went on to make a carrot and apple juice – again, something I had never tried before. Wow! I was having my mind and taste-buds blown wide open! And this was just in a 15-minute window of time in his tiny home kitchen.

After that I realised just how important it is to not only learn from others, but to actually learn first-hand and to TASTE the recipes. We all want it to be EASY!

And so it was that just two simple recipes shown to me in a friend’s home literally did change my life.

So just think what an entire raw food class can do!

Today things are different to back then, but in a very good way.

Not only are there more raw food enthusiasts around today who want to learn at raw food classes (raw food is really getting big now because of the huge amount of interest in veganism), but there are literally MILLIONS of other people out there (you probably know a few hundred yourself), who, if raw food was “packaged” in a different way, they would be all over it and loving it just as much as you do…

You only have to think about a handful of your friends and family, or work colleagues, to realise that EVERYONE can benefit from raw food – and they’d be totally open to learning about it if it were presented to them in a “non-raw-food-labelled” way!

And so it is that, whether you want to teach raw food to raw foodies, or to teach others who are totally new to raw food but really want to experience the benefits (without the label), NOW is most definitely the time to make your raw teaching dream come true, because the time is RIPE with possibility – and it’s NEVER been better.

And it’s just going to get better, because everything (literally everything) is heading in this direction.

20 years ago I ran my first raw food class, and that filled up in a few short weeks with hardly any advertising – and that’s when raw foodies were pretty rare indeed!

14 years ago I ran an off-the-cuff class and filled it to capacity (40 people) in JUST 5 days!

It was after that that I realised that more raw food teachers were needed – and FAST!

It broke my heart, because these were great people with wonderful intentions (and great, delicious recipes!), but they tried to make it on passion alone. And while passion is absolutely vital, it’s very much a FACT that passion is most definitely NOT enough.

Realising that I had a blueprint that worked (over and over again), I decided that I would be of the greatest service, ultimately, if I would share my hard-won “secrets” with other Raw Food Teachers and Raw Food Coaches who wanted to teach, because this simply couldn’t continue.

And so, my journey as a Trainer began 12 years ago when I ran my first Raw Teacher Training live in England to a total of over 70 people from all around the world over a two-year period. Two years later in 2009 I went deeper still, and released an in-depth home study training program going into all the nuts-and-bolts of planning, marketing, running and teaching a unique raw food class. And then, in August 2011, I took my teacher business training LIVE at a fantastic venue in London where I showed 30+ people from all around the world how to teach my hugely popular “Raw Food Made Simple” class.

In 2012, I then took it up a notch yet again and created the most amazing, step-by-step, all-you-need-to-know Raw Food Teacher Training possible. Many hundreds of people went through that training and absolutely LOVED it – the testimonials were off-the-charts!

And now here in 2019, I have gone a few steps beyond yet again, adding in two completely done-for-you class plans (one is 2 hours, the other 4-5 hours), a complete one-day video class of me teaching my signature class “RawFood Made Simple” so you can see how I teach classes no matter where you are in the world, and there’s also 25 of my most popular recipes that you can use in any class of your own creation! (And there’s more.)

This Raw Teacher Training will show you how to teach awesome, profitable classes that change lives and are a complete joy to teach, no matter where you’re starting from – and I’m ready to share it with you again, starting in June 2019.

Please note that this Training is open to ANYONE, anywhere in the world, with any level of raw food knowledge and experience. It’s 100% virtual – meaning that you can learn it from the comfort of your own home, and at your own pace.

It’s also in a format that anyone can work with, with each of the 16  training modules comprising of a training handout and audio recording plus specific training-related assignments and a transcript. You’ll also receive step-by-step guides, all-important checklists, invaluable scripts and pre-written copy, fill-in-the-blank forms and templates, financial spreadsheets and sample handouts – there’s even a Countdown Calendar to the big day!

Literally everything you could want to create, plan and profit from your own raw food classes, is provided to you through this Training – and I couldn’t be more excited to share it with you.