Product Delivery: You will receive a receipt with download link through email

.
Now, discover the surprising SECRET to hitting someone
with a force equal to 3 1/2 times your body weight!

“What If Everything
You Thought You Knew
About Punching & Kicking…
Was Wrong?”

Facing a worst-case nightmare (some scumbag intent on
harming you or a loved one) you better have a heck of a lot
more than run-of-the-mill “punching and kicking”
in your protection “toolbox.”

And now you can… literally transforming yourself
into an unstoppable… “Human Battering Ram!” 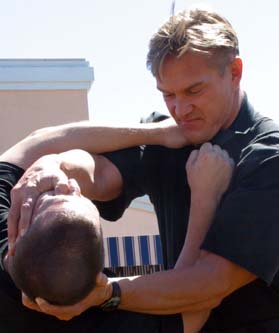 You know what a punch or kick is, right?

Your fist planted square in his jaw. The toe of your boot imprinted on his knee.

The kind of stuff you’ve done since you were a kid. Right?

The Truth About ‘Striking’

Let’s back up for just a sec and take a look at punching and kicking, and let’s do it by using a baseball analogy…

See, when you throw that fist or snap that kick it’s kinda like beaning a guy with a baseball.

For sure… it hurts.

In fact, it may hurt a lot, depending on how strong you are.

But it’s nothing compared to the damage you could do if you were to hit him with a baseball bat… one that just happened to weigh the same as you do!

That’s what true “striking” is really about.

And the new TFT Striking DVD series shows you exactly how to do it!

In a real fight, it’s what we call…

TFT Striking completely redefines what it means to “hit” someone.

In fact, you see for the first time anywhere why…

Striking Is Truly The Base Engine
That Drives All Violence!

Watch this new series, and you’ll totally understand why that critical INJURY that stops some thug cold is caused by your BODY WEIGHT in motion not by how well you swing your arms and legs. You’re shown exactly how to move YOUR body weight to cause maximum damage.

You’ll quickly understand it’s not just about using your arms and legs as “pistons.”

No. It’s about you literally becoming… a human battering ram!

The manual that comes with this Program describes it well:

Most Punching & Kicking Instruction
Has You Focused
On The WRONG Thing…YOU!

They’re mired in techniques that have you watching how YOU move… when what really matters is HOW MUCH DAMAGE you’re doing to the other guy!

Everything is about looking outward… at RESULTS… rather than inward at what you’re doing.

Another thing: most other punching & kicking instruction starts out showing you how to “get ready to fight.” You’ve seen it… how to get your feet set, your “dukes up” to protect yourself.

You won’t find any of that useless crap in this Program.

This isn’t about competition or squaring off to defend yourself. There’s no time for that in unavoidable life-or-death physical confrontation.

All that matters is an explosion of injury to that other guy… injury that requires medical attention. That’s what gets you out the other side — alive.

And that’s EXACTLY what you’ll see here! In spades.

If She Can Do It,
Imagine What You Can Do!

Let me tell you a story that brings the whole “bodyweight in motion” thing together for you.

I had a young woman attend a live training session we put on in Las Vegas a couple years ago who may have been the finest martial arts “stylist” I’ve ever seen.

She was very small; no more than 5′. But she was easily the fastest person in class. And her punching and kicking form was impeccable.

Except for one thing.

Every time she shot a punch or kick out… she immediately snapped it back! She was the classic martial arts “points” fighter (snap a punch, land a light blow and SCORE A POINT, then yank the arm or leg back quickly). It wasn’t surprising to learn she was undefeated in years of competition in Shotokan Karate.

Her Punches & Kicks Had ZERO POWER…
None Whatsoever!

After all her success she’d been led to believe she could handle any altercation. Yet in a real confrontation, her picture-perfect shots would have done nothing but piss somebody off because she sure wouldn’t have injured him!

So ingrained was her training that after the first two days of class she still hadn’t accepted the concept of using her bodyweight to generate power.

But late Saturday it all jelled.

And Sunday morning, during her first free-fighting session, she was absolutely devastating. These were her words:

That’s the power of Striking!

In a perfect world, we’d have released this new series before we released our Lethal Leverage product, even before our Nuclear Weapons series.

That’s because It truly IS the engine that drives everything leading to injury.

It takes you from hitting someone with a “baseball”… to hitting them with a truck!

This Program Gives You
The Tools Needed To Injure Him… Now!

As with all TFT programs, the primary function of this one is to give you the tools necessary to cause injury. And to do it very fast.

Again, the manual spells this out:

To this end, here’s just a fraction of unique material you’ll find in this new series:

TFT Striking describes what a metronome teaches you about dealing with violence, it answers the question: how many ways are there to kick a man in the groin? (the answer, contrary to what most teach… there’s just ONE! The rest are all just techniques!), and it explains the exact distance you must be from an attacker to Strike with maximum force and power… and why most people are never at this distance! (In fact, it show why practically everyone is convinced they’re properly positioned even though they’re almost always too far away).

The Most Complete Series Every Created
On Destroying Some Scumbag…
Using Only Your Own Body Tools!

This new TFT Striking series is built around the same innovative format we began using with TFT Joint Breaking. By putting the principles behind Striking on the first two DVDs, we effectively doubled the speed at which you absorbe this unique material.

Nick Smith, of Salt Lake City, Utah, commented, “The techniques you teach in the new Striking Series are easy to follow but would be completely ineffective if you hadn’t taken the time to first explain the principles behind them!”

OK, so here’s what you get.

First, there are 4 DVDs plus a supplemental Manual.

As noted, your first two DVDs cover the basics: the definitions and explanations… all the principles behind the concepts!

Then DVDs 3 and 4 take you by the hand and lead you through lots of physical examples… 47 different coordination sets that explain, in detail, each aspect of striking.

These begin with the most elementary yet powerful striking movements (nope, they’re NOT punching and kicking, at least not as you know them) then weave through the entire spectrum of vertical and horizontal striking (including both of you fighting from the ground)!

You’ll also see the complete integration with other TFT programs!

For example, you indirectly learned about using body weight in TFT Lethal Leverage but here you’ll see explicitly how (and why) it’s the key to accomplishing those breaks!

And as with TFT Lethal Leverage, there’s an in-depth manual that supplements but does NOT duplicate what’s shown on the DVDs. It lets you see much more of the detail on some critical points without slowing the flow of the DVDs.

It’s a terrific reference resource that also contains examples there simply wasn’t room to squeeze onto the DVDs.

Get All Your Questions Answered…
LIVE… During A FREE Bonus Teleconference Call.

And, as we did with TFT Lethal Leverage, we’ll also include a special bonus teleconference certificate that let’s you join us on a live call where we’ll answer all your questions about this new series.

The Lethal Leverage teleconference call was one of the most popular (and most requested) we’ve ever done and we expect the Striking call to offer even more. More insights, more tips… the nuggets that only come from live question and answer, stuff that just couldn’t be squeezed onto the DVDs.

If you miss it, this call will be available to all TFT Striking owners as an .mp3 download for listening whenever you chose on your IPOD or other .mp3 device.

However, we want you to have a chance to sample it risk-free, to experience the shocking power you already posses (and the ease with which you can call it up). In short, to prove it’s everything you’ve just read… and MUCH more… totally on us.

So for now you can check this new program out… for FREE, if you like… for only $197.

You get the complete 4 DVD set…

You get the Manual…

You get the teleconference call certificate…

If you prefer, there’s also an easy payment plan option — see the ordering information below.

And in case you’re wondering about SHIPPING… most everything goes out within 48 hours of your order!

And it doesn’t cost you a dime more to get this service… it’s our commitment to you!

You Get My Full, 365-Day Guarantee!
It Lets You Review TFT Striking..
Even For FREE…If You Like!

As with all our products, you take no risk whatsoever. I shoulder that burden.

You’ve got ONE FULL YEAR to try this Program… on me.

If TFT Striking isn’t exactly as I’ve described above… if it doesn’t put more power into every strike regardless of the situation (even if you only use it in your martial art), then send it back for a full refund of your purchase price (less shipping).

Whatever you choose, it’s your call!

And since you’ve gotten the Jeff Anderson (At-Home) Lethal Weapon Defense System system, I’d like to make you this additional…

For Jeff Anderson Customers Only:

Or choose our new convenient payment plan… just 12 easy payments of $34.75/month. And remember, your entire package is delivered right to your door with your first payment.

You Can’t Wait On This One

As with all TFT programs, this one is very different from anything you’ve seen before.

That’s one of the reasons TFT is so effective… it’s not just the same rehashed stuff you’ve seen before.

It’s scientifically proven, universal in application and most importantly… it WORKS… regardless of your prior background or physical ability!

It takes the complete focus off what YOU are doing and instead puts it squarely on the RESULTS you must be getting.

After seeing this series, you’ll never just “punch” or “kick” someone again.

TFT Striking is a must-see… and a must-have in your library of personal protection DVDs!

Be the first to review “Target-Focus Training – Striking” Cancel reply

Wendy Patton – Get the Deed “Subject To”